Computer Combat Cards were created by William Lau, a Computing teacher based in London, England. William decided to create the game when his five-year-old son Zi came home with some trump cards that his friend had given to him at school.

The content is primarily based on the GCSE Computer Science syllabus and is influenced by the many versions of trumps that exist (see below). The initial aim was to cover as much computer science theory as possible in a card game. William wanted to print 50 decks to give to his GCSE and A-Level computer science students. However, the costs of printing were quite high. Anticipating demand, William decided to print several hundred decks. The decks would be sold in order to finance those that he would give away. As the whole project is about learning and social mobility, the cards are also available as a digital download under a Free Creative Commons BY-SA 4.0 license.

Where did “Trumps” the card game actually come from?

The word “trump” comes from the Latin word “triumphus” meaning “a triumph”. A trump card refers to a card which outranks all other cards. The oldest form of trump card game was probably a 15th Century French or Spanish card game called Triomphe or Triunfo respectively. The modern game as many of us know it started in Austria around the 1800s with an educational card game called Quartets. In the early 1970s, German company Altenburg-Stralsunder released Ace Trumps. This was followed a few years later by British company Dubreq, who released Top Trumps in 1978.

Many computer enthusiasts have created their own computer-themed versions of this popular game including: David Phillips, Simon Johnson, Rachael Duckster, James Abela, Jim Brown, Jamie Mitchell, Richard Herbert, Gavin Craddock, Dominic Pajak, Dave Smale and Mike Jenkins. I do not claim to be the first to create such a game and I hope I am not the last. As technology and the computer science curriculum evolve, I hope this game will inspire others to create their own games or suggest improvements here.

All product and company names are trademarks™ or registered® trademarks of their respective holders. Use of them does not imply any affiliation with or endorsement by them. While every attempt has been made to ensure that the information in this game is correct, Computer Combat Cards is not responsible for any errors. Corrections or comments can be submitted here. 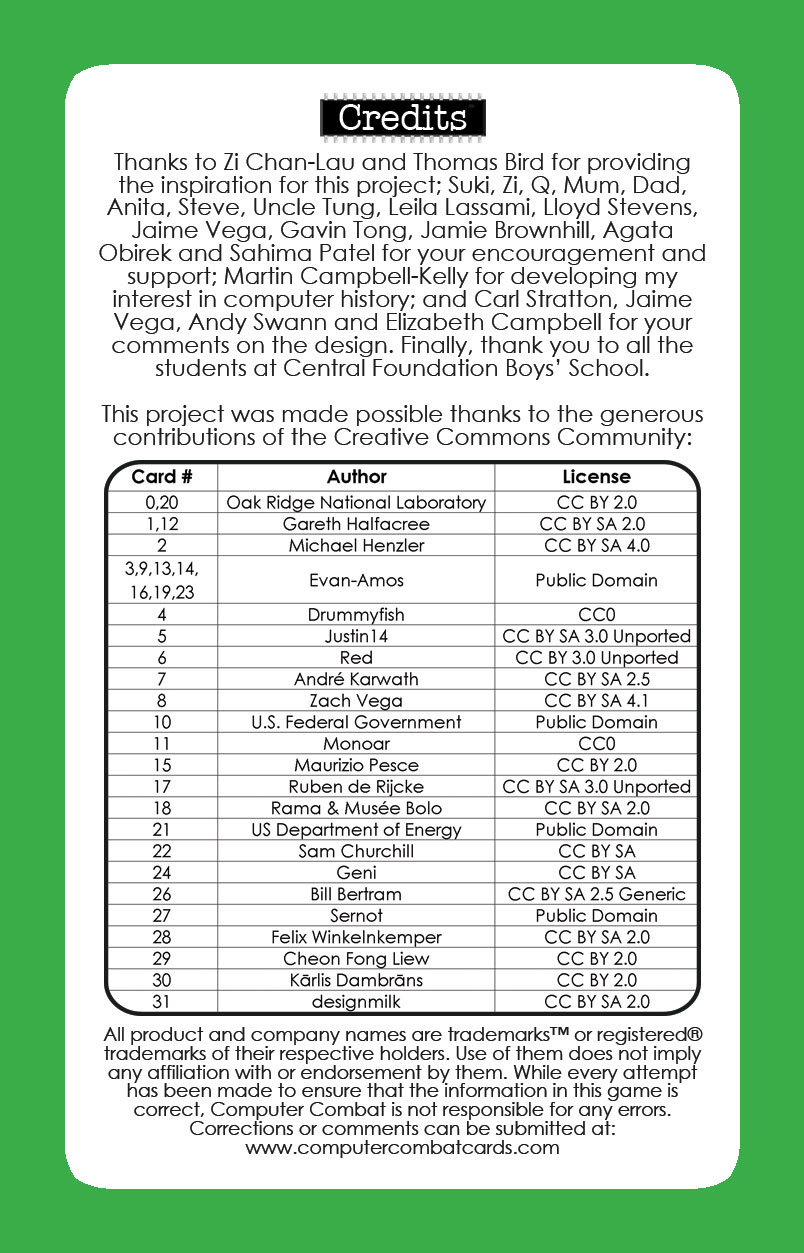